When Salman Khan brought the character of Chulbul Pandey to the big screen for the first time nine years ago, audience went gaga over his swag. Dabangg released in theatres on 10 September 2010 2010 and now, after nine years, Salman is set to bring the third installment of the franchise to the big screen. 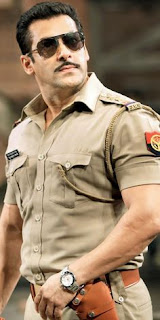 The makers of Dabangg 3 recently released a new video of the film, introducing the villain of the film – Bali. Sudeep Sanjeev is playing the role of Bali.

Salman shared the video saying, “It’s a lot of fun to encounter a villain like Bali Singh, this time the collision will be great! #BeingChulbul

Entertainment News: Sunny Leone’s make-up turned out to be skinned

Entertainment News: Sunny Leone’s make-up turned out to be skinned

Entertinment News: Siddharth Shukla is the winner of Bigg Boss 13